“Nobody in the world, nobody in history, has ever gotten their freedom by appealing to the moral sense of the people who were oppressing them”  – Assata Shakur

Breonna Taylor, George Floyd, and Ahmaud Arbrey have been the most recent victims of a heinous crime that has plagued the United States since the 1800s: lynching. From George Meadows to Emmett Till to the most recent cases, lynching has been White America’s favorite execution method for Black Americans, using it to keep them “in their place”. However, Black Americans eventually decided that enough was enough, and soon, protests, sit-ins, and many other actions were used to battle against unjust discrimination, eventually leading to an end of the Jim Crow Era.

Yet half a century later, lynching’s are still occurring, despite being made a federal crime in February 2020. Coming from a small private school where diversity is nearly nonexistent, many of the conversations I have had with my non-black friends about the most recent lynching’s involves their frustration with the way Black Americans have responded. Why loot and burn stores? What will that solve? Wouldn’t peaceful protests be a much better solution? In all honesty, these are fair arguments. Looting and rioting is never the correct way to solve issues, and in fact, will just cause more division. It is not justifiable. But our anger and frustrations are. What they fail to understand is that the black people participating in these crimes are angry against an inherently racist organization that swears they are here to protect us, yet kill us cold-blooded, even when we are doing nothing wrong. They believe that this is their way of getting back at the systems that were put in place to keep us down.

As you know, this is not the first time an unarmed black person has fallen victim to police brutality. In 2014, Eric Garner was killed via strangulation by an NYPD officer in broad daylight. The reason? The officers suspected him of selling single cigarettes from packs without a tax stamp. A few months later, Tamir Rice, a twelve-year-old boy, was shot and killed by a Cleveland police officer within two seconds of him and his partner arriving on the scene. The reason? He was carrying an airsoft gun. Neither of the participating officers were indicted before a grand jury.

These are just two examples of cases that happened to have been filmed by either bystanders or surveillance video. Philando Castile, Willie Mccoy, Charles Kinsey, and many more have all been victims of police brutality. With cases like these being so prevalent, there is no doubt that skin color plays a big role in how officers react to the situations. A study in which a video game was used on cops to examine the effect of a person’s ethnicity in shoot/don’t shoot decisions found that white participants made the correct decision to shoot an armed target more quickly if the target was black than if he was white, but decided to not shoot an unarmed target more quickly if he was white. A 2019 study also found that about 1 in every 1,000 black men can expect to be killed by police. Black men and women, Alaska Native men and women, and American Indians are significantly more likely than white women and men to be killed by police. Latino men are also more likely to be killed by police than are white men. 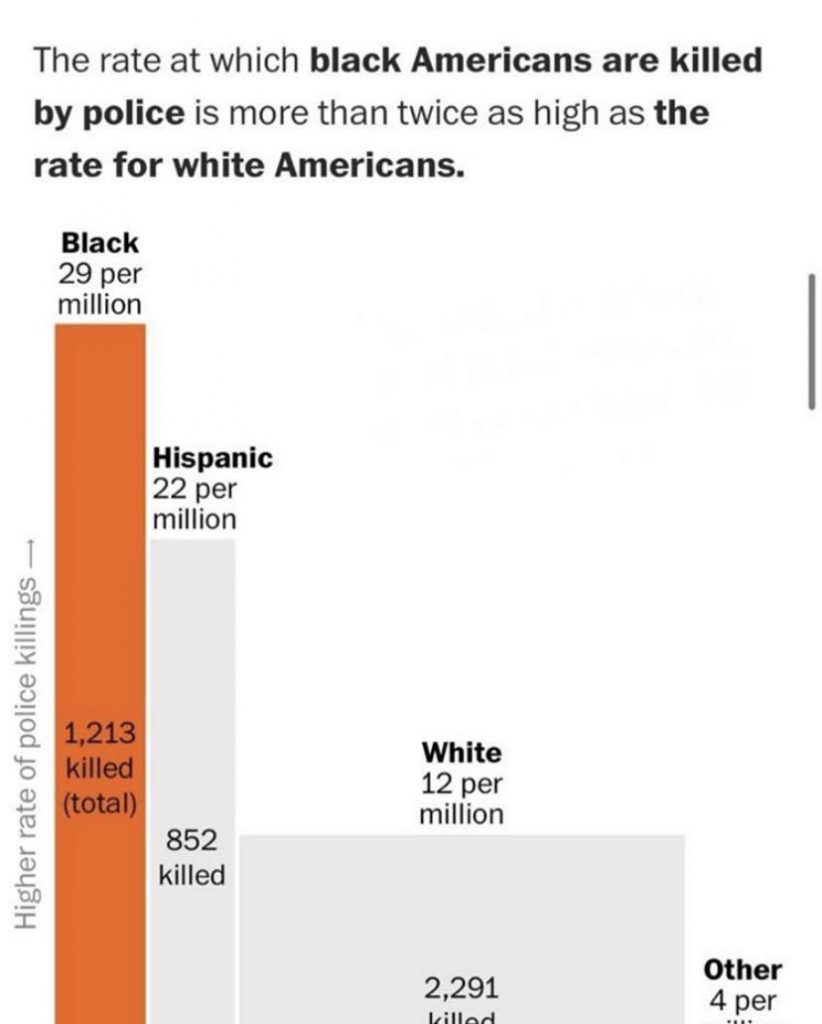 So, why not peacefully protest the blatant discrimination? Did it not work when Dr. King was leading them? Despite what many will have you believe; Dr. King was not a well-liked man in his time. According to a 1966 poll, he was one of the most hated men in America. “Bloody Sunday” was the true turning point of America’s stance on Jim Crow because the racism and abuse that Black Americans faced on an everyday basis were televised. The only reason why his nonviolent marches worked so well is that black people were all on the same page. They wanted an end to the Jim Crow Era for not only themselves but for future generations as well. Now, however, when black-on-black crime is more prevalent than ever, it is obvious that we are divided not only as a community but as a country now more than ever. Because of this, it is difficult for us to come together and bring about solutions. Peaceful protests are also not off-limits to police brutality, as shown in this video here.

Why not call politicians and police chiefs to make our voices heard that way? We have. But we have come to realize that politicians do not care about our voices, nor about any of the everyday struggles we face. How are we supposed to trust politicians, the same ones who swear they will do everything in their power to make our voices heard, when they completely abandon us once they are elected? More specifically, how are we supposed to trust any officer when a simple traffic stop can turn deadly, and even if you comply with the officer, you still have a chance at being murdered?

So, why do we riot? We riot because racism is still rampant throughout America, despite the many people who say otherwise. We riot because the same organization that claims to protect us is the same one murdering us cold-blooded. We riot because peaceful protests are viewed as more of a threat than people storming to their capital buildings with loaded AR-15s and other weapons demanding for businesses to reopen during a global pandemic. We riot because if there is no justice, how can there be peace?