Was Martin Luther King Jr.’s hard work all for nothing?

What if Martin Luther King Jr. had survived his assassination on April 4th, 1968? What if instead he was placed in a coma, only to be awoken today? Would he be happy that Jim Crow Laws and other forms of blatant racism have ceased to exist, or would he instead focus all his efforts into ending the violence and dangers that linger in black communities nationwide?  This is the question that The Boondocks (one of my favorite TV shows of all time) attempts to answer in the ninth episode of season one titled Return of the King.

First, we must identify  what exactly did MLK die for. Was it to end racism and the unjust persecutions of people based on the color of their skin? Or was it to dispose of the stereotypes that white people portrayed black people to be? The short answer is both of these things. And while King, along with the rest of the Civil Rights Movement, succeeded by laying down the foundation for us, we have completely crushed their hopes and dreams of what the future for us could have been. This is most perfectly demonstrated by the shows opening statement.

I want young men and young women who are not alive today… to know and see that these new privileges and oppurtunities did not come without somebody suffering and sacrificing for them.

What follows is a response in the form of another quote.

While this line was most likely just added for comedic effect, it is not a stretch to say that some black people would actually respond like this. It seems as though we understand that our ancestors fought to end racism and the unfair persecutions of our people, we do not take it seriously. Our actions today show not only do we not care, but that we are ungrateful for their courage and efforts by risking their lives by attempting (and succeeding) to give us a life that they could only dream of.

So how exactly did we repay them? By completely backtracking on everything they fought for. A perfect example of this is a scene in which MLK and Huey are sitting on the couch watching television and flip through multiple channels, each portraying black people in a stereotypical and negative light in the forms of rap music and reality television. Turning to Huey and sighing, King asks a very important question.

“What Happened Huey? What happened to our people?

Could this scene be any closer to reality? Taking a look at the Billboard Hot 100 Chart, most of the songs made by black people are rap, many of which portray them in a negative light by having lyrics that objectifies women, glorifies gang violence, and perhaps the most dangerous one, glorifies drug use. The glorification of drug use to deal with mental illnesses and/or trauma is a dangerous message that is pushed on the youth today, especially young black kids who don’t know any better and look up to these rappers as role models. After all, this is exactly how Juicewrld became involved in drug use. But, that’s a discussion for another time. In short, Hip Hop has become a modern day minstrel show. The glorification of our drug-ridden, impoverished neighborhoods coupled with our damaging mindset serve only as entertainment to those who do not experience it. 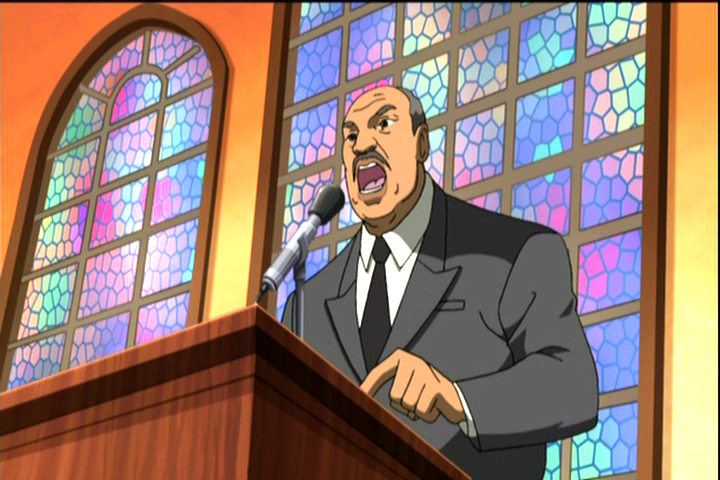 The final and perhaps most entertaining part of the episode is MLK’s speech in the Church. After Huey convinces him to create a black revolutionary political party, Martin goes on a TV show to promote it. However, this plan backfires after Huey attacks the host of the show for repeatedly interrupting King. King and Huey then decide to take matters into their own hands by going door to door to hand out flyers to promote an event that King will be hosting. He plans to give more background into the party and clarify any questions. But as the date soon approaches, King hires an urban promotions firm to help get the word out due to him not having much experience with modern media. When Huey becomes aware of this, the expression on his face is enough to cause King to regret his decision.

After being forced to pay a greedy bouncer to attend the event that he is hosting, he is finally allowed inside the Church. Here, Huey and King are significantly disappointed by what they see inside: a plethora of scantly dressed women and pimps dance while music that degeneracy-glorifying music blasts in the background. As multiple black speakers come up to speak and promote their own businesses, they eventually take a break to pray and give thanks to “White Jesus” for making “all this positive black sh*t possible.” They then continue to go about their previous ways with no problem. This highlights the mindset that not just black people, but people in general have in regards to religion. The “once saved, always saved” doctrine. This is the philosophy that you can live anyway you want to but as long as you thank God every once in a while, you are saved.

Eventually, a fed-up Martin rushes to the stage to start his speech, but he stutters and stammers due to him not being able to even hear himself speak. Frustrated, he ventures off into a furious tirade in which he uses the same word that was created to bring us down and hold authority over us.

Could you ignorant niggas please shut the hell up?

The crowd, shocked by Dr. King’s vulgarity, completely stops what they are doing. He then goes on to explain just exactly what “niggas” are: living contradictions. He continues his rant by expressing how disappointed he is, asking if all his hard work was in vain, before ending it by humorously stating his intentions to relocate to Canada.

Despite being aired in 2006, this episode is still incredibly relevant to today’s society nearly 15 years later. King and the other members of the civil rights movement showed their bravery by accomplishing incredible achievements. We should be capitalizing off their success and making them proud, not doing the exact opposite. Until we as a community realize this and try to change, all of King’s efforts, along with the countless of other important figures of the Civil Rights Movement such as Emmett Till, Rosa Parks, and Malcolm X, will forever be in vain.